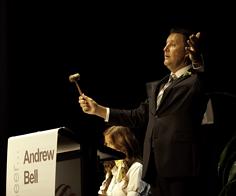 Ray White‘s Andrew Bell says Chinese buyers are drawn to the Gold Coast for its ‘great value in addition to our sought-after lifestyle and subtropical climate’.

Auction activity will be quiet across the capital cities until after school holidays, but on the Gold Coast, late January is a very busy time. This year, buyer confidence from the capitals may begin spreading to this iconic leisure market, which has been characterised by a lack of capital growth and an oversupply of mortgagee stock.

Property has sold at a loss throughout the Gold Coast since the global financial crisis; it was one of the worst-affected areas across the lifestyle market.

In 2013, lifestyle property continued to make losses: about 33 per cent of Gold Coast properties were sold for less that what was originally paid, according to RP Data. Units in particular still sell for a loss.

In comparison, less than 5 per cent of properties resold at a loss in Sydney and Perth – two markets notably characterised by the sort of stellar price growth and strong buyer sentiment that has evaded the Gold Coast.

Optimistic agents have tipped a market turnaround on the Gold Coast, encouraged by a strong start to 2014. In mid-January, Tom Offermann Real Estate held one of its triannual gala auction events and sold five properties for a total of $8.8 million.

Firm principal Tom Offermann says the properties sold for more than 2013 prices, and in some cases went well above reserve.

Australian Property Monitors senior economist Andrew Wilson says he does not expect price growth across the Gold Coast market for some time, but says prices have stabilised and buyer activity is increasing. After about four years of cheap unit sales and little top-end activity, there are now more multimillion-dollar sales.

McGrath Estate Agents notched up a list of high-end properties that traded for more than $3 million last year. Hope Island, Mermaid Beach and Benowa Waters were the best-performing areas.

Three of the highest auction results included a Southport home for $9.8 million, an Isle of Capri property for $6.35 million and a Mermaid Beach home for $7.35 million.

Looking broadly across the investment market, Aviate Group managing director Neil Smoli prefers Brisbane’s property fundamentals over the Gold Coast, and says he cannot buy into suggestions the region has turned a corner.

“The Gold Coast remains subject to oversupply issues. Taking a long-term view, there is insufficient detail available to suggest that white-collar employment will grow in a sustainable way to absorb the current vacancy and create compelling reasons for developers or investors to look at this market,” Smoli says.

As a result, new developments are in the pipeline. Before Christmas, a new 40-storey, 174-unit high-rise has been approved for Surfers Paradise Boulevard near the city’s new light-rail corridor.

The growing trend of offshore investment into Australian property, particularly from China, has also begun to emerge on the Gold Coast.

Ray White Surfers Paradise will host its annual Gold Coast auction showcase, The Event, at the end of January and chief executive Andrew Bell says it was well timed to coincide with Chinese New Year.

“[Chinese buyers] have identified great value in addition to our sought-after lifestyle and subtropical climate,” he says.

Bell is gearing up for three days of buoyant activity, and says market conditions are at their best in more than eight years. The Event 2014 will start on January 27, with residential and marine auctions, followed by the prestige auction on January 30 at Palazzo Versace.

Wary local investors may continue to avoid the Gold Coast until it sustains a consistent period of stable prices. Others may choose to take advantage of the value for money it offers, particularly when stacked against waterfront equivalents in the capital cities.

Bell will auction a five-bedroom, five-bathroom Sanctuary Cove property at the prestige home auction, which is set on almost 1900 square metres. The resort-style home has a guest suite, Miele-equipped kitchen, outdoor kitchen and alfresco living area overlooking the pool and tropical gardens.

How We Can Help You?