Select seaside housing markets dependant on tourism and the holiday homebuyer market are likely to be among 2014’s worst performing property markets, according to DSRscore.com.au figures.

DSRScore’s September data revealed which Australian suburbs were facing an undersupply of property and, conversely, an oversupply.

While an undersupply of property was considered favourable to investors, areas with an oversupply, coupled with high vacancy rates and little demand from property buyers, were deemed markets with little potential for immediate capital growth.

The markets with the biggest oversupply issues included:

A popular holiday retreat close to Grafton, the Wooli housing market is in an oversupply crisis with close to 10% of all properties in the town currently up for sale. That’s a major problem for a market with only 500 permanent residents and a buying public that has had little appetite for holiday home purchases since the GFC.

A popular spot on Queensland’s Fraser Coast, Maryborough has seen a surge of properties coming onto the market, most notably in the neighbourhood east of the Mary River. This part of town has plenty of open tracts available for new development, which explains Maryborough East’s staggering oversupply problem: 9.3% of all its properties are up for sale.

Not far from Maryborough East, Burrum Heads is a satellite suburb of Hervey Bay, the gateway town to tourist favourite Fraser Island. Like Maryborough East, it too is facing an oversupply crisis and little in the way of a buying public to soak it up. Properties are languishing on the market for lengthy periods, evidenced by the average time it takes for listed properties to sell: 17 months.

A fairly new suburb, Pelican Point is an affluent housing market within Bunbury – one where prices normally fetch for anywhere from $600,000 upwards. Development has been at a high rate over recent years, but demand hasn’t kept pace. The result is a market where there are too many houses and one where there will be cap on house price growth over the immediate future.

Other markets facing an oversupply of property included: 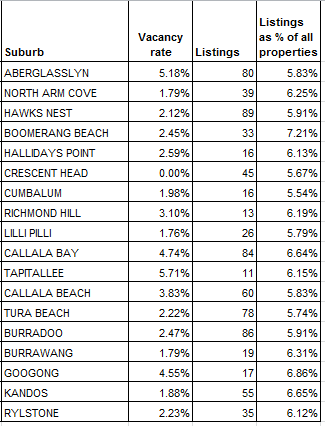 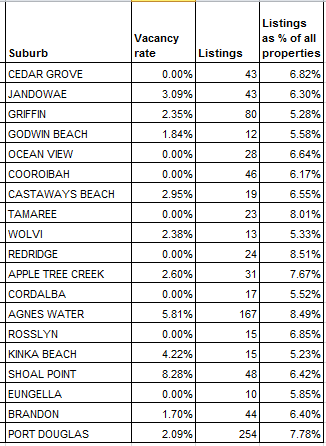