PRE-SALES POINT TO BUMPER SEASON FOR THE EVENT 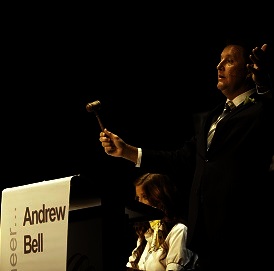 EXPECTATIONS have risen for another bumper property selling season as 10 per cent of homes destined for this Sunday’s The Event auction have already sold.

Close to 120 properties are set to go under the hammer in this weekend’s program, one of Australia’s largest real estate auctions.

Now in its 22nd year, The Event – staged by Ray White Surfers Paradise Group (RWSP) – is expected to sell more than $20 million worth of properties.

RWSP CEO Andrew Bell says 10 per cent of homes have sold prior to auction and he is receiving plenty of feedback that Queensland is coming into its own and that confidence in the Gold Coast property market will see a bumper weekend.

“There is a nervousness among people in NSW and Victoria that their markets have been running solid for two years and that perhaps their price growth has peaked,” he says.

“So a lot of the interstate investors are more concerned about buying in Melbourne and Sydney than the other markets and are looking further afield.

“They do identify Queensland, and particularly the Gold Coast, as offering great returns.”Bell says it is also interesting that Sydney is getting close to the high 2 per cent rental vacancies and rising, whereas on the Gold Coast it is considerably lower at 1.9 per cent.

“Our own office at the moment is 0.6 per cent, so that shows that there is real capacity and a real need for investors to bring rental properties into the marketplace,” he says.

The Event also aims to capitalise on the influx of tourists and interstate visitors that are currently holidaying on the Gold Coast.

“In the September quarter last year, just on 50 per cent of our sales and we did over 450 sales went to people who lived outside the Gold Coast, so they are a very big component of our market at the present,” says Bell.

“The Event will capture the huge amount of visitors who are enjoying their summer holidays here.”

Among the list of properties is a 770sqm north-facing beachfront penthouse with uninterrupted views over two levels and three bedrooms each with own balcony.

The Event will be held at the Gold Coast Turf Club’s new Exhibition Centre, which has around five times more space than last year, and coincides with the Gold Coast Home and Living Expo.

The expo will feature more than 30 exhibitors who will showcase a range of products and services, among them are lawyers, financial planners, accountants, solar companies and builders.